Java 8: Back to the Future

Published by Agraj Mangal on February 1, 2018

Or should I say CompletableFuture ?

The Future interface was first introduced in Java5, but until Java8 it offered pretty limited functionality with the caller of the future, getting blocked when trying to retrieve the result of an asynchronous operation performed by the future. Now we can all agree that blocking is not a good thing! So Java8 comes to our rescue & adds the capability to register a callback (amongst others) to your future. This way we are not bothered about when the future is finished and that is the way it should be. 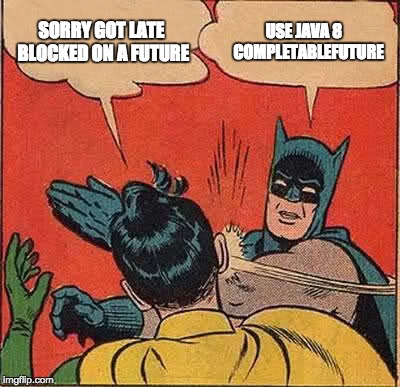 That is, one must delay calling get on the Future until it was absolutely necessary. The problem with this approach is that the caller may not know how long to wait before blocking on the future. 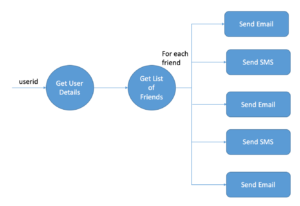 All of these could be modeled as async CompletionStages but 2 depends on completion of 1 and must happen in sequence while once we have the friends list, we can send them email/sms in parallel. A pseudocode for the same would look like

In the code snippet above, we fetch the user details and then the list of friends asynchronously and then using thenAccept we iterate over the list of users and send them an email notifying of some promotional campaign or anything else. Here we are using thenAccept as we do not need to return anything from this CompletionStage but what if we wanted to be notified when all the emails are sent. Following example shows how to achieve that:

Notice how we are using thenCompose in the above code snippet instead of thenApply or thenAccept The reason for this is that thenCompose has the capability to wait on the passed function ( it takes as an argument of type CompletionStage and can wait for it to complete) but others do not take a CompletionStage. Hence they cannot wait for the completion of a passed future. This means that you can pass a future to thenAccept or thenApply but you cannot ask to wait on those futures to finish.

Yes, read it again. It won’t be clear to you the first time. Moreoever,

One can also use other methods such as thenCombine , thenAcceptBoth , runAfterBoth ( or their async versions )  to combine the results of just two futures running independently and when you want to take some actions when both the futures are complete. Pseudocode:

Though not often required, but sometimes its useful to know how to cancel a future if for example it has been running for unexpectedly long time. In such cases, you could just call the cancel method on CompletableFuture. The cancel method completes this future with a CancellationException and all the dependent futures that have not already completed will also complete exceptionally with this exception. It takes an argument mayInterruptIfRunning but it is not used for CompletableFutures as interrupts are not used to control processing in CompletableFutures

CompletableFuture provide us with a Bloated API ( ~50 odd methods ) – the key here is to understand the various functional interfaces it uses – Function<T,R>, Consumer<T>, Supplier<T>, Runnable, BiFunction<T,U,R> , BiConsumer<T,U> & of course our beloved CompletionStage. A very crude summary of these are offered in the following table:

Once we understand these functional interfaces, the following tables groups together the most frequently used APIs and relate them with these interfaces. It must be noted here that async variations of these methods and variations taking a custom Executor of these methods are not listed in the tables below for brevity. 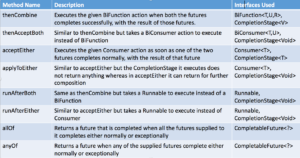 Congratulations if you have made it so far. This was a pretty long post but was necessary to cover the various aspects of asynchronous execution that CompletableFuture provides. The complete source code for all the examples in the blog post can be found here. CompletableFuture is an excellent addition to a developer’s concurrency arsenal and although it may seem daunting to use, at first, it provides us with a way to write elegant and non-blocking asynchronous code once you get a hold of its APIs.

Update: Java9 adds support for subclassing, new factory methods and supports for delays and timeouts to the CompletableFuture but that probably calls for another blogpost!