Published by Agraj Mangal on February 1, 2019 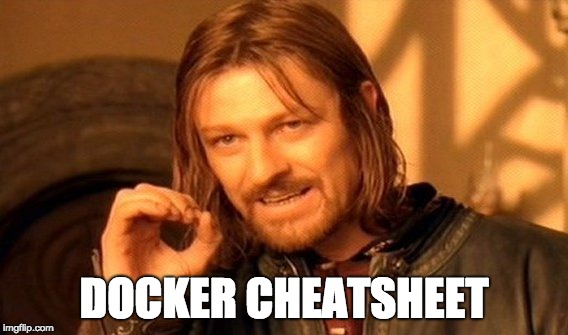 Docker is definitely not the new kid on the block, but it has emerged as a first class citizen with spiralling cloud-native applications. So whether you are a seasoned developer or a budding devops engineer, you would often find yourself working with Docker CLI as you work with containers. This is my take on creating a Docker cheatsheet which is nothing more than a quick compilation of the most frequently used docker commands that I fool around with.

As a side note, docker ps  is also an alias for docker container ls

Using linux pipes, grep  and awk  we can search for a particular container by name or image. Some examples:

The second command using awk  to grab just the container ids for all the istio based containers. This list can further be passed to other docker commands as a lot of commands need container id to work with.

Filters allow you to narrow down your search by specifying a key-value pair with the --filter  argument to docker ps  command. Some examples:

You can also use before  and since  to filter out containers created before and after a particular container:

Another useful option is to filter by ports exposed by a container:

There are many pre-defined filters that you could use with  --filter  argument, please refer to docker docs for their possible values. One can also use -f instead of --filter . If there is more than one filter, then pass multiple flags (e.g. --filter "foo=bar" --filter "bif=baz" )

Remove All containers associated with an Image

Get Container Id from Image Name

Container Ids are often used in other commands like rm , exec , kill , stop , start , logs  and the like. To get the container id from an image, you can either use

It can remove all stopped containers, all networks that are not being used by at least one container and all dangling images. It also clears up the build cache holding the pulled images. The prune  command has further potential to clear volumes used by containers

When you restart a docker container that has been stopped, you cannot override the default command.

The docker run  command actually first creates a container from the given image and then runs it. So in a sense, docker run  equals docker create  and docker start  with a few minor gotchas.

Like when you run the hello-world image, it creates a container from the given image and runs the default command specified in its Dockerfile. You can override the default command and run your own while it may not make a lot of sense sometimes but you can still do

What it will do is, override any default command that alpine  image had ( if it had one ) and run the echo hi there  command instead. Also note that any arguments to docker run  override the arguments passed to CMD  in Dockerfile.

You can execute any command that is supported by the image, once you have the id of the running container using exec

This will work only if the command is supported by the running container, for example running python  on an alpine  image without installing python will not work.

Shell Into the Running Container

This is absolutely essential sometimes to get inside a running container and understand whats going on – shell to the rescue. Mostly used for debugging on local/dev environments.

Shell into a running container using the id
ZSH

Tag an image while building it
ZSH

Tagging an image becomes essential as you build and deploy custom images for you application, you must tag them with release numbers to version the images so that one can pull different versions of your application as and when required.

As always when in doubt please refer to docker official docs for best practices and details about supported arguments to these commands.